Today was the day… Gen Con after months of preparation on many arenas, the gaming conference extraordinaire was to begin. And begin it did! Though I’m certain the crowds will feel thicker in days to come, booths certainly looked busy enough. From T.R.’s past experiences, we knew that attendees should plan to purchase the highest priority game first thing in the morning. But this blog isn’t about things we purchased – it will focus on accessibility, and what we did.

First, I have to say that we are quite pleased with our downtown hotel! The Springhill Suites not only offered a handicap-friendly room (that fit ADA standards better than many accessible hotel rooms we’ve visited in the past), but the tables in the public breakfast room are even the proper build that a wheelchair can slide in appropriately. One other reason that we chose this hotel is that it is part of the “skywalk” network leading to the Convention Center. This may sound petty to some readers, but one weather-related MS symptom I face is heat intolerance. If air temperature is over 80 degrees, my energy drains quite horribly. With today’s heat index predicted to reach near 100, I would feel like a pool of jello, unable to move. So suffice it to say, I appreciated the skywalk, even though the route became less direct.

I will admit that our experience was a little less typical, as T.R. is managing the booth of the British company Modiphius, so our family members had “exhibitor” badges. (My husband and daughter are spending each afternoon working in the booth, and they completed much of the set-up work Tuesday and Wednesday. They’ve earned those badges!

Today held more unique bits of adventure than I had foreseen! The first main game we purchased included something special about events like Gen Con: our family was able to demo it, instructed by somebody who knew more about the game than we did. “Hogwarts Battle” was a fun cooperative game, and I even had the chance to play a favorite character, Hermione Granger! Because we played the game there, we each received a ribbon of a Hogwarts House of our choice, so you may notice the “Hufflepuff” ribbon in my badge. We also purchased and perused “Star Trek Panic,” so our family members received Star Trek ribbons for our badges. In honor of my parents, I picked “medical officer.”]

I have been a part of game play at Gen Con before, but the Harry Potter game table was set up in such a way that I could sit at the table, my knees didn’t hit strangely, and I didn’t feel like an outsider. Neat indeed! The Convention Center also keeps very tight watch over aisles and such. Not only did we find that people acted courteously in general, but there were even times when two or three wheelchairs were traveling almost the exact same path, side-by-side or in a line. Kinda crazy.

What made the day particularly special? For me, the people! Because T.R. has been completing Freelance projects for a number of publishers, I have heard different names, 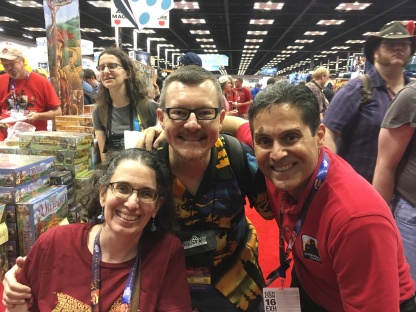 even heard voices on podcasts we often listen to. I’ll post a few snapshots here to give an idea of neat interactions we had. One other wasn’t photographed, but I had to mention it here… I enjoyed a fun little conversation with Andrew Looney! I told him of the neat exchange I’d had during our church game day. A game card in Fluxx is signed by him to 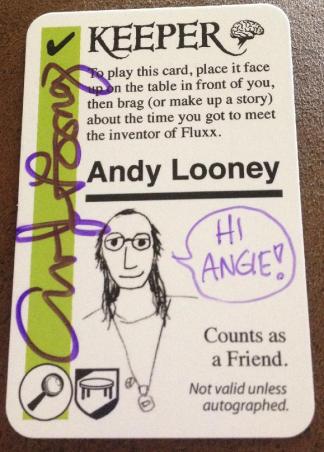 me, to be particularly used as a “friend” – and I can attest that he really does look like this illustration!

This is an unusual report for me, as Friday, for me will involve an exciting Writer’s Conference at Taylor University. With so much on my plate this weekend, do I regret spending time and energy attending Gen Con? My answer is simple: not at all! This conference has offered our family an enjoyable, engaging, and memorable time. Our country has come a long way since the ADA was enacted twenty-six years ago, and this slice of gaming time demonstrated to me that physical accommodation has become purposeful, considerate, and expected. Kudos to Indianapolis, the Convention Center, and all who help Gen Con meet its goal to be the Best Four Days of Gaming!