During our earlier years of marriage, T.R. and I enjoyed going to state parks, museums, or fun little spots that we happened upon. After five years of marriage, these walks involved pushing either a double stroller or two smaller strollers. And time moved on. When the former stroller riders were in kindergarten, my own walking abilities started to falter, and I began using a cane on occasion. Then always. Then after medications became less useful, when those two young ladies were in junior high and high school, I started using a walker in the home and at church, and a wheelchair when we traveled or attended school events. As you can imagine, the walks with my dear husband dwindled away in time.

The wheelchair does allow us to traverse the world together, as long as paths or streets are smooth and free of debris and potholes. Which means that very few area streets worked for walks, and many paths were simply not passable. We searched for a wheelchair that was more all-terrain, but we what seemed like a simple request was anything but. The wheels on a wheelchair are generally not meant for use at uneven or rocky paths, and why would we want such a thing? Well, we were determined to find such a thing.

We had seen “jogging strollers,” allowing a mother (or father) to transport a young one, so I swallowed my pride as I assisted my dear husband in the search for an adult version of this. As we called mobility-related places (wheelchair sales locations), we came up dry. But we live in the age of the Internet, we knew there had to be something.

Somewhere. We tried different semantics, and the term that finally worked was “push chair.” The Axiom Endeavor , though pricey, appeared to be what we were looking for. Then came the next step. This was Autumn 2017, and after we communicated with the manufacturer about the specifics of this item, we started our research into cost and insurance. I won’t share all of the details here, but suffice it to say that several medical reports and letters assisted in the final outcome, and by late December the push was in our possession!

Winter in Indiana… not the time for an outdoor stroll. So the unnamed Axiom sat unused and alone until the weather broke, and I believe it was early May that the first outside jaunt took place. A “push chair” is just that – an extremely well-engineered lawn chair of 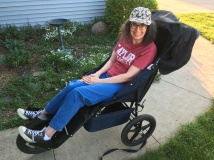 sorts, with supports for over 250 pounds of weight (thankfully not all necessary), with three large, sturdy tires. It could be pushed by my loving husband so we could take a walk of several blocks around our street. And that, my friends, shows how this is, indeed, a “love story.” A grown man bent over backward to research and obtain this item, and now he is pushing his wife in it, with them having conversations with folks along the way. He takes care of it, adds air to the tires when necessary, assists her in getting in and out, and demonstrates both patience and chivalry as they take their walks.

I’m jumping ahead in the story, though. What could we call this contraption? We’re not parts of the Facebook Age for no reason, so we asked for suggestions, of course. After receiving several fun acronyms as ideas (no, Steve and Roger, it was not going to be S.M.O.O.C.H.), we started narrowing it down. Barbie’s “Harriot the Chariot” was in the

running, but then we both thought a nod to an 80’s television show would be perfect. “Knight Rider” it is. Friends jokingly suggested we adhere flames to the sides, but that is far from necessary. We’ll each wear a weather-appropriate hat, sunscreen when necessary, and a coat as needed, but we can go on walks together again.

And that was the biggest reason the Knight Rider resides now in our home. My “Knight in Faded Denim” still wishes to share walks with his wife, even though many things have changed. He still loves ME, and I certainly love him!

Valentine bonus: T.R. and I just recorded a podcast about our history of playing games together. Episode 197 – Alls Fair in Love and Gaming – from “Game Store Prophets” of Innroads Ministries.

13 thoughts on “Knight Rider – a tale of true love”